Today I got up at 10:40 am, and by the time I strolled downstairs bleary-eyed and made a coffee it was nigh on 10:55 am. Any other day this would not be relevant, but today, today I had perfect timing.

Poppies: A symbol of remembrance day

For those of you reading this that aren’t British, and for those that are who don’t watch the ceremony at the Cenotaph on television or in person, let me explain what happens, and why that one little thing made me massively proud to be British.

There is a lot of background military goings-on in the pre-run up; there is a military band and a march up to the Cenotaph itself. Then, at five to the hour, important people came out of the foreign office in a specific order. I’m trying to remember what the order was; I believe the high commissioners from the commonwealth countries came out first. There was one from each, all carrying a wreath to remember their dead. Botswanna. India, Trinidad and Tobago. Canada. New Zealand. Jamaica.

Now. I know what you are going to say, this a reason to not be proud to be British; the only reason that these countries have to be here today, 100 years after the First World War, is because of our commonwealth empire. They should have never been involved and not a single person should have died. Maybe so. Maybe not, maybe they would have been involved anyway.

Ultimately though, at that preccise moment when they all came out in a silent line of black, it made me cry. Regardless of whose fault it was they were there – that is something irrevocable now. The reasons are gone forever. One hundred years on we just cannot alter those events. We can’t take it back. God knows, we would if we could.

What we can do is remember them.

We will remember them

So. Seeing these many people, from all over the world, come here, still, one hundred years on, to remember the fallen with us, made me cry.

Then, still crying, I watched the politicians come out, new and old. All carrying a wreath. And for the first time? A representative from Ireland. Not Northern Island (they were there, but they come every year), Ireland itself. That gave me another lump in my throat; one hundred years on here they were, Ireland, remembering their dead with us. Troubles aside for one day, one hour, two minutes even; in order to remember the dead together.

Then came the religious leaders; this was another spectacle. You would never see the like; Sikh, Greek Orthodox, Jew, you name it there was somebody to represent it. How amazing it that? Where else would you see that? All together without question to honour the millions of dead from Britain and across the commonwealth.

I was full-on crying at this point.

It was now getting very close to eleven.

Finally, came the The Royal Family, the Queen, The Duke of Edinburgh, and five of their sons, and grandson, whom have a military role.

Republicans may say what they wish about the Royals, on any other day, but on this day; surely you can’t help but be proud? Seeing them there together in their military uniforms to honour the dead with such respect?

Well. I suppose you may well say the First World War was their fault to begin with. You would be right, in a way. But there is one key difference. It wasn’t my Queens fault. You cannot simply place the actions of her ancestors on her shoulders, you can’t weigh her down with the actions of three old men from another era, another time.

Her husband, the Duke of Edinburgh, is 93 years old. 93! And there he was, remembering the dead as he does every year; ram-rod straight back as he stood there in front of the Cenotaph. He was the ‘top-cadet’ in 1939 apparently, and he fought in WW2 with great bravery, so they tell us. I think that is impressive.

The other members of the Royal Family to lay wreaths all had military service, past or current, in the case of the Duke of Cambridge (William). I felt proud as I watched.

And then it was 30 seconds to eleven.

The first chime of Big Ben sounded with a bang, as the accompanying guns went off. I was scared for a minute that someone had set a bomb off, until I recalled the guns mark the first chime every year.

As the final chime sounded the cenotaph and the area around it lay silent. So silent.

This sea of people – veterans, politicians, religious leaders, royalty, and the general public – all deadly silent.

As the guns went again to signal the end of the two minutes the Queen went up to lay her wreath on behalf of the nation; in her black coat, black heels and black hat, with her usual bunch of red poppies pinned to a silver brooch on her left shoulder. Her family did the same with their wreaths, and then followed on the politicians, and everyone else. The Cenotaph was quickly sitting on a bed of red poppies, and wreaths.

After they had all been laid and the brief religious ceremony had been done they played the National Anthem. The Queen must have heard it sung for her a million times but I swear this time she had to swallow a lump in her throat. I swear there was a tear in eye. To be there at such a moment, on the 100 year centenary, to remember our dead, to lay a wreath on behalf of the country, and then have a sea of people sing God Save the Queen with such pride, must be moving.

And then, as she left, a shocking thing happened.

People began to applaud her.

This has never happened before. It never happens. Why today? Well, the commentator said that there were immense dangers running up to today, a suspected terror plot, and so they were probably applauding her courage and defiance at being there. I would assume someone suggested to her to not go, for fear of it. Or it must have been discussed. But of course she was there. Of course she was. I would have applauded her too had I been there.

That is why those five minutes made me fiercely proud to be British. Proud that we have such an ability to carry on a tradition to bring people from all countries, religions, and political parties, together for 11:00 am every single year to remember the dead in such a poignant fashion. Proud of all those British, and commonwealth, men that died for me. Died so that our country could have liberty. 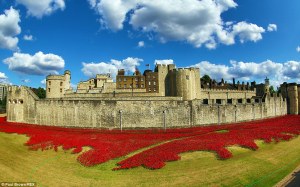 They shall grow not old, as we that are left grow old:
Age shall not weary them, nor the years condemn.
At the going down of the sun and in the morning
We will remember them

The most well-known paragraph of ‘For the Fallen’ Poem by Robert Laurence Binyon.

As a note: we also should remember those that have fought for our country and survived, of whom there are many, and they may need help or after-care.

Please feel free, readers from other countries, to tell me via the comments box below how you remember such occasions; what ceremonies make you cry, or make you proud of your country? It would be interesting to know.

Search for stuff your looking for!!

1. The arts and other manifestations of human intellectual achievement regarded collectively

2. The ideas, customs, and social behaviour of a particular people or society